Etta and I drove up the highway for smoked meat on Sunday, from one of Chicago’s most popular restaurants. I dropped off the dry cleaning and navigated the Kennedy while Etta placed the order by phone. When we arrived at Smoque, I parked outside. It was about 5PM and there was a line way out the door. I asked the busser how to deal with the line- he directed me right in to the register. Minutes later we were on the Irving Park road to Portage Park for some BBQ in the grass. 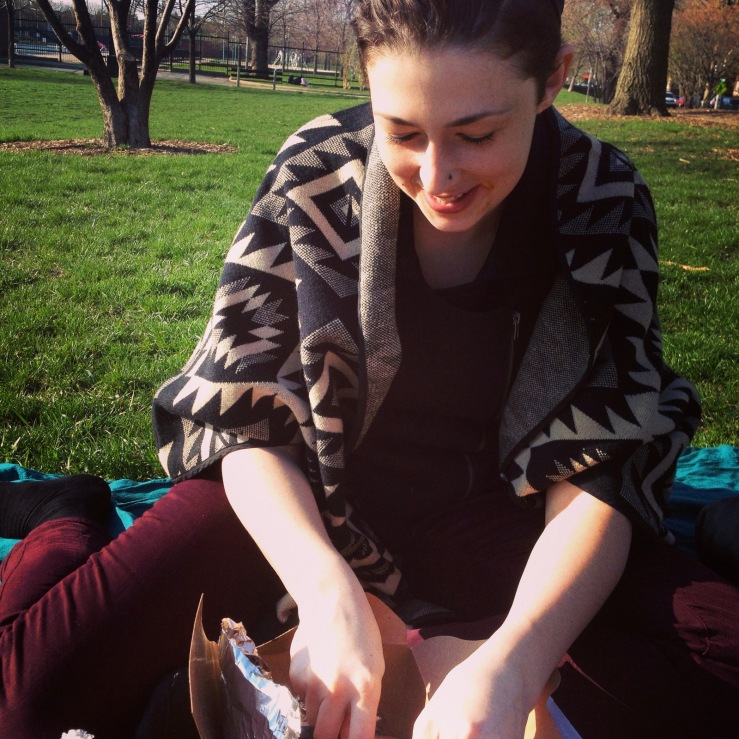 The trees were greened out in buds and baby leaves. The grass was lush and the ground was dry. We got two slabs of St. Louis style ribs with creamy crusty edged mac and cheese, not-sweet cornbread, well seasoned fries and peach cobbler, which we got to later. Actually there was cole slaw too, but haven’t got to that yet either. The ribs were unbelievable, pink smoke ring, so much smoky flavor that my hands still smell like a campfire. They need no sauce. I ate half the slab and was so full I meat-tripped the rest of the afternoon well into the evening.

Deann and I made a bet- she said the leaves would be in full bloom next week and I said this week.