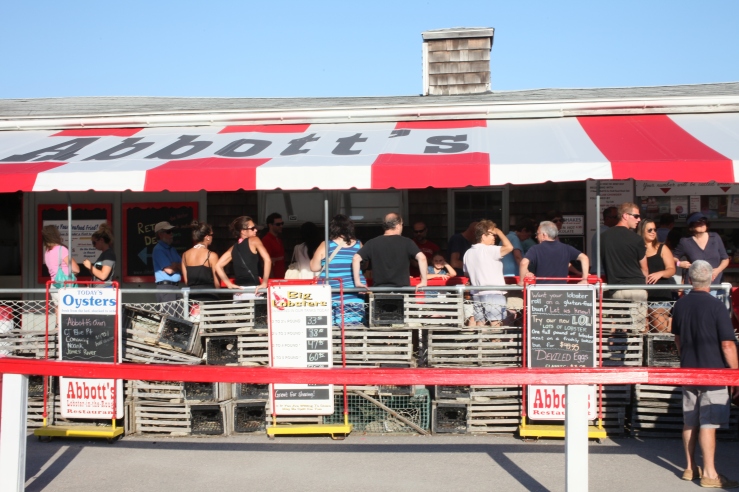 Aunt Judy and I had not been to Abbott’s in roughly (see what I did there?!) 20 years. We drove up the CT shore from Guilford for dinner one summer night. Noank is a trip, literally, and well worth the 45 minute drive for one of the world’s best Connecticut-style (read: hot butterered) lobster rolls. Instead of a traditional hotdog bun, Abbott’s serves their legendary version on a toasted sesame seed bun.

Aunty and I agreed the lobster rolls were absolutely delicious, and the local sweet corn was a perfect side for this summer treat. The people watching (tourists who don’t understand the counter-style ordering system common at New England clam shacks) was just as good as the natural beauty of Long Island Sound and Fischer’s Island.

We joked that if I worked at Abbott’s, it would be in the separate Dessert Hut (this is actually not a joke, in a different life I am known as Jabba the Dessert Hut.) The only thing I would change, if I ruled the world (or at least had some influence on a Connecticut foodie institution like Abbott’s) would be the elimination of styrofoam cups and plates.

I understand the need to keep costs low… and more and more businesses are starting to understand that we have to keep environmental costs low to preserve nature’s beauty. It would be awesome if Abbott’s got on board! In any event, it was a real treat for my aunt and me. We will be back!