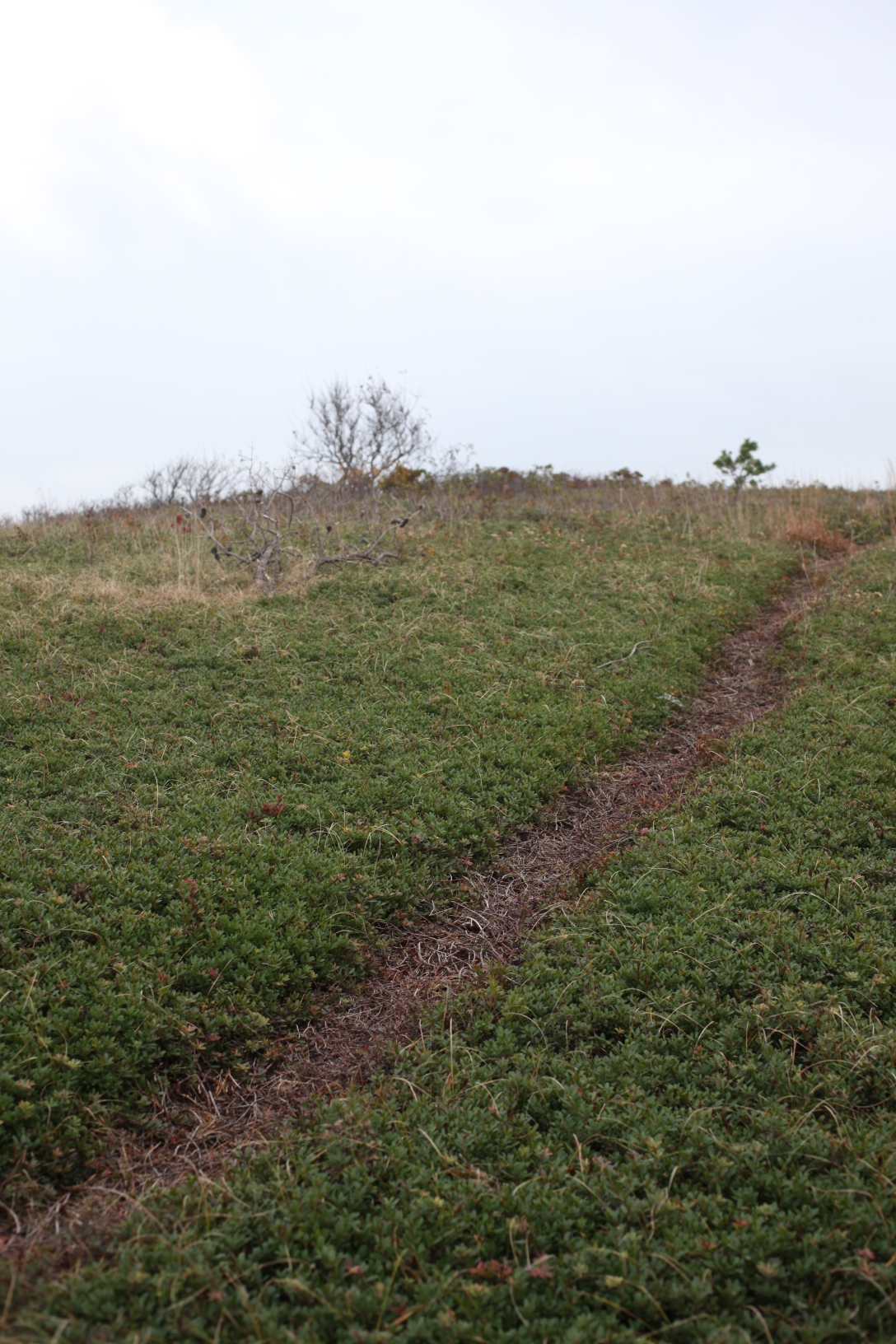 “There is, perhaps, no town where the peculiar formation of the Cape can be more clearly seen than at Truro. Here, among the rolling dunes, with houses tucked into the hollows at their base, out of reach of the winds, and with the winding roads recalling the old days when every wagon had an extra width of tire and axle so as to get through the heavy sand, one can most easily trace the history of this curious topography.

These hills, many of them so green that only the initiated realize that they are in reality sand dunes, with opening vistas through which one may catch a glimpse of the sea; with paths leading between them to the solitary and distant houses of which we may see only a bit of the roof; with their little gardens lying like bracelets around their bases; with their stunted trees, and low levels of red and brown, wind-licked marshes with their inlets and creeks; and with their churches placed high on an occasional crest, like the little rocky chapels on the Cornish coast of England — this is Truro!

This half-desolate and wholly fascinating landscape is not infrequently described as typical of the whole Cape. It is not. Down through Falmouth and Sandwich and Bourne there are fertile farms and heavy forests: more of both than there were seventy-five years ago. The increase in forest land on the Cape comes about in this way: When a tract of land that has been tilled is abandoned, — the farmer having died and his sons having gone to the city, — it becomes covered by grass by the end of a year or two. The year after, miniature pitch pines have sprung up; in another year, bushes. In an astonishingly short time a vigorous low growth clothes the once bare stretch. With the advent of the Portuguese, however, and the always increasing cranberry industry, more land is brought under cultivation every year. And thus the Cape is gradually being reforested and refarmed.

Many travelers to Cape Cod are astonished, and a little disappointed, to see green grass and sylvan glades where they expected only white sand dunes. There are plenty of dunes if one knows where to look for them, scattered up and down the coast. But in the more fertile regions it is difficult to trace the original formation of the land. If you wish to view mile after mile of wild barrens, where the vegetation is chiefly moss, and where the sand after every storm drifts over the heads of the submerged bushes and piles up around the decaying fence rails; where there is hardly a boulder as big as your hand, or even gravel, and the layer of soil is so thin that you can kick it off with your toe — then go to Truro. Here, more easily than anywhere else, — unless it be in Provincetown, — you will see land in the process of making.

Cape Cod is sixty-five miles long on the North Shore, and eighty on the South and East. The average breadth is six miles, and at Truro this narrows down to three. The greatest height above the sea is at Scargo Hill in Dennis, which is three hundred feet high.

The region of Barnstable County is composed entirely of glacial drift, even to a depth of three hundred feet in some places. This was brought down in the ice age. A backbone runs across the county, and from its height one may often, when driving through the wood roads, come out, as on a plateau, and catch a glimpse of the sea. There is a clay vein, too, which starts across the Cape and crops out at Truro in the so-called ‘Clay Pounds,’ now crowned with a lighthouse, shining two hundred feet above the ocean. Clam-shells and oyster-shells are sometimes found miles inland, away from any breath of the ocean. They are thought to be the last traces of some Indian village.

In spite of the popular conviction that the entire Cape is merely one sweep of Sahara-like desert, it was thickly forested when Gosnold discovered it, and it is in many places richly wooded to-day, although Naushon alone attests the noble forests of the past. Those who have seen the autumn forests will never forget them. Those for whom this great delight is still in store cannot do better than to read Thoreau’s classic description: ‘I never saw an autumnal landscape so beautifully painted as this was. It was like the richest rug imaginable spread over an uneven surface; no damask nor velvet, nor Tyrian dye or stuffs, nor the work of any loom, could ever match it. There was the incredibly bright red of the huckleberry, and the reddish brown of the bayberry, mingled with the bright and living green of small pitch pines, and also the duller green of the bayberry, boxberry, and plum; the yellowish green of the shrub oaks, and the various golden and yellow and fawn-colored tints of the birch and maple and aspen, each making its own figure, and, in the midst, the few yellow sand-slides on the sides of the hills looked like the white floor seen through rents in the rug.’

If one should sail in an aeroplane above Barnstable County he would see not only shores and beaches, gardens, orchards, cranberry bogs, groves of trees; lawns and leafy thickets; pleasant meadows and hilly slopes where grow the aster and the goldenrod, the violet and mayflowers in due season; but, as he approached Truro, he would see that all these things grew fewer. Here, in spite of strenuous efforts to fasten down the sand and strengthen the harbor shore by planting beach-grass and trees, the sand has choked up the harbor, and even yet sifts against the houses and drifts over the gardens, and in time of storm whirls across the narrow strip of land until even the humblest cottage may boast ground-glass windows.

In Truro, as in Provincetown, the soil for the first gardens was brought over in the hold of vessels. Quite naturally farming has never been the principal occupation in such a region as this. Settled in 1709 by a few English purchasers from Eastham, — having been previously occupied by irresponsible fishermen and traders, — it began its career energetically, and under the name of ‘Dangerfield’ it waged war against the blackbirds and crows, wolves and foxes; dug clams, fished by the line and net, and watched for whales, in vigorous pioneer fashion. The name of Truro comes from the market town in Cornwall. Like other towns it had its mackerel fleet, its whalers, and its salt industry. In 1830 to 1855 the wharves were crowded with sloops and schooners. A shipyard was kept busy, and the ‘turtle-shells of the salt-works,’ which Thoreau notes, were dotted all along the shore. Here the first Methodist meeting-house on the Cape and the second in New England was built. Doubtless it was the prototype of those picturesque little structures that are silhouetted against the sky to-day.

When the Revolution put an end to their maritime enterprise, the Truro fishermen, like the rest of the Cape-Codders, melted up their mackerel leads for bullets, and made a record so valiant that it will never be forgotten as long as American history is read.

It was from this wind-swept and sand- scoured town of twenty-three houses that twenty-eight men gave up their lives for liberty. The spirit in which they carried out the embargo on tea was amazing. Once a brigantine, loaded with tea, waited outside Truro and offered a large reward for transportation services to shore. But not a single inhabitant from the town could be prevailed upon to touch a single box of the cargo, notwithstanding, as the old records state, ‘that we had several vessels here unemployed.’ Their determination was equaled by their ingenuity. Once, when the enemy appeared off the shore, the town was defenseless except for a small militia, and the British seemed about to land. The same sand dunes that make this section so different from other sections rolled back from the coast — then as now. The handful of militia took a position behind the inner hill, walked over it, and then, hidden by a hill in front, walked back, around, and over the first elevation again, thus making a procession of theatrical length. This trick — popular in sheet and pillow-case parties — deceived the enemy, and they sailed away without attempting to land.

If you were a farmer you might fall a victim to despair searching for a scrap of soil in the lee of some hill into which to thrust a seed. But if you are merely a traveler you will be struck by the beautiful wild sterility of this section of the Cape, recalling similar moors in the romantic ‘Lorna Doone’ country. You will pause for a long look as you reach the top of the hill by the Grand View Farm. There you will see the red-roofed cottage half hidden by the slope and the flash of the sea far beyond. The little gardens terraced patiently down the various grades will remind you of the Azores, and you will not be astonished to hear the farmer speaking the Portuguese tongue. You will pause again as you come out on the hilltop where you get your first glimpse of Provincetown, and see it lying before you as you have so often seen it on the map, beckoning you out — and out…

Fishing and fighting — these were the two original industries of this old Indian Pamet. And the inhabitants did them both with a will, until the sand choked up their harbor and the enemy departed from their coast. Now the struggle for existence is more difficult and less spectacular. The little farmhouses that dot the hills testify to the isolation of the lives which are lived there. Bayberry candles and beach-plum jelly, mayflowers and heather, sent to market eke out many a meager household stipend, and the smallness of the garden patches bear pathetic testimony to the results of the season’s labor.

A tiny free library finds its niche at the bottom of a hill; the towers of the churches shine against the sky, reminding us of that other church in far Tintagel where, once a year, at Christmas-time, the bells ring out, without the touch of human hand. And reminding us, too, that the first Methodist meeting-house on the Cape and the second in the country was built in Truro, in 1794. Down on the shore there is a colony of summer folk, and the wide automobile road binds Truro to the rest of the world.”